Start a Wiki
Angus Oblong is an American illustrator, author, and creator of The Oblongs.

Born in Sacramento, California, he attended the University of California for a few years, but quit before finishing. His reason was that he really just wanted to get out and start doing things that nobody else had done before. He had moved to San Francisco and begun selling comics out of his home.

He moved to Los Angeles, California at the request of his agent when a "bidding war" was underway over whether FOX,  Warner Brothers, or Disney would produce what became The Oblongs. When his work began garnering attention from the press, he started wearing "thick clown makeup and a bulbous, red plastic nose" in public places, a practice he has continued.

Angus was constantly butting heads with the writers at the beginning, because he had a different vision than everyone else. In the end, he only got at least 10% of his vision into it. He ended up leaving the writing process to leave room for them to work, and oversaw the animation process, which he enjoyed much more.

When the show ended, he was sad that it was over, but he was also relieved that he did not have to struggle in a constant uphill battle to get in his ideas anymore. In the end, he truly did not feel that it was "his show". That being said, he still thought that it wasn't half-bad. 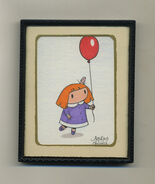 Add a photo to this gallery
Retrieved from "https://oblongs.fandom.com/wiki/Angus_Oblong?oldid=7310"
Community content is available under CC-BY-SA unless otherwise noted.