Biff and Chip are conjoined 16-year olds, and students at Hill Valley High.

Chip is dating a Valley girl named Courtney. He is very laid back and prefers to have fun rather than work. Biff describes Chip as "a goof-off with a Dorothy Hamill haircut, but he has more heart than you ever will".

Biff and Chip are conjoined at the hip, and have two arms each, three legs, and three buttcheeks. They wear a plain green shirt with blue pants, and wear grey sneakers called "buster browns". Chip has his brown hair shaved into a bowl cut, while Biff has a blonde mohawk.

"He's like this burnout at school, Crackhead Lenny. Yeah, what a total wastoid. He steals tools from shop, never eats, he's all sweaty and jittery... Can he sleep over this weekend?"
―Milo Interrupted
"Do you have to wear that hat, dad? You look like a Robin Hood Pez dispenser."
―Bucketheads
"I prefer to stay focused on the manliness of sports. Coach always says, heart, obedience, motivation, opportunity. H-O-M-O."
―The Golden Child
"Are you saying I'll be joined to another person for the rest of my life?! We'll be freaks!"
―Get Off My Back

Biff and Chip in "Milo Interrupted". 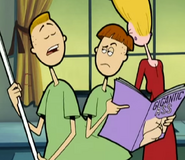 Biff and Chip in "The Golden Child". 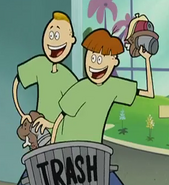 Biff, Chip, and Milo getting a tattoo in "Get Off My Back".

Biff and Chip in "Father of the Bribe".
Add a photo to this gallery
Retrieved from "https://oblongs.fandom.com/wiki/Biff_and_Chip_Oblong?oldid=7213"
Community content is available under CC-BY-SA unless otherwise noted.