Blaine is the best friend of Jared, and a student at Hill Valley High. He enjoys picking on the Valley kids, especially Milo, Biff, and Chip.

He is a rich, snobby, rude bully to the Valley kids, and even his house maid. He finds anything that they do frustrating, especially when they go to the Hills onto his turf. He usually follows Jared's orders, from cheating to beating kids up, and compliments on whatever he does to the Valley kids.

He has black hair slicked forward into a curl which goes upwards, and he wears a matching white shirt, pants and shoes. He uses a black belt for his pants.

"Rah rah Biff! Pride, sacrifice, desire. You're a first-string dork!"
―Get Off My Back 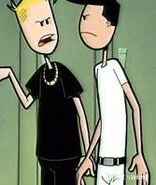 Blaine and Jared in "Misfit Love". 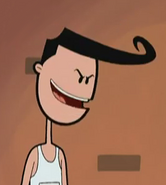 Blaine in "Get Off My Back".

Blaine in "Father of the Bribe". 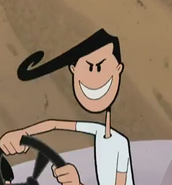 Blaine in "Father of the Bribe".
Add a photo to this gallery
Retrieved from "https://oblongs.fandom.com/wiki/Blaine?oldid=6984"
Community content is available under CC-BY-SA unless otherwise noted.