Bob is the head of the Oblong family, and Globocide bottle capper. He was born without arms or legs.

He is eternally optimistic, upbeat, cheery, and has a lot of spirit. Even without arms or legs, he does everything just as a normal father would do. He takes the best out of everything and is always trying to do the right thing even when he's ignored.

He has black balding hair and thick eyebrows. He has a white sleeveless shirt with a pocket, and a black tie. He wears a black belt with a brown "pantlet". He is usually seen with a pipe.

"Boys, personal hygiene isn't a chore; it's a privilege. It's what separates our great nation from dirty smelly places like France and the public library."
―Misfit Love
"Son, you know you're forbidden to handle anything sharper than a boiled egg."
―Misfit Love
"Just doing my dead-end job! Tote that barge, lift that bale. Yes sir, Mr. Klimer. Promotion? No sir, I don't truck with that. I just wanna work for the man."
―The Golden Child
"Thank you dearest, we aim to please. Or as the French say, AWOOGA!"
―Please Be Genital

Bob and Lucky in "Misfit Love". 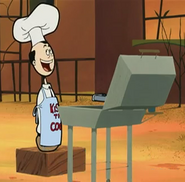 Bob working on his replica of the Kon-Tiki in "Milo Interrupted". 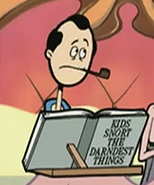 Bob in "Please Be Genital".
Add a photo to this gallery
Retrieved from "https://oblongs.fandom.com/wiki/Bob_Oblong?oldid=7115"
Community content is available under CC-BY-SA unless otherwise noted.