Start a Wiki
Debbie is the leader of "The Debbies", and a student at Hill Valley High. Apart from being the wealthiest girl at her school, Debbie is also the most popular.

As a Debbie, she is obsessed with popularity and fashion. She treats the Clubhouse kids like dirt, especially when Milo ran against her in the school elections. However, it is shown that she can be nice to the Valley kids only when she becomes hideous herself. Once she becomes gorgeous again she reverts back to herself and hates them.

She looks exactly like the other Debbies. She has big blonde hair with a bow and wears a pink shirt and slightly darker pink skirt.

"And that shows how I'm directly descended from Cinderella."
―Disfigured Debbie
"Kay, we're having a big fundraiser. I'm sure you've all heard about the recent earthquake in like, China I think. I mean, the carnage is on every other channel. So we need money to get cable in the student lounge so we don't miss our soaps!"
―Disfigured Debbie
"I made you a virgin Daiquiri, Mrs. Oblong! Hee hee! I said virgin!"
―Disfigured Debbie 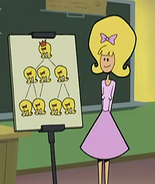 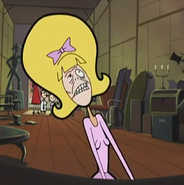 Debbie after the accident in "Disfigured Debbie". 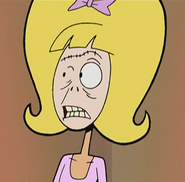 Debbie in "Disfigured Debbie".
Add a photo to this gallery
Retrieved from "https://oblongs.fandom.com/wiki/Debbie_Klimer?oldid=7360"
Community content is available under CC-BY-SA unless otherwise noted.