Start a Wiki
Helga is a 10-year old friend of Milo, and is one of the Clubhouse kids. She is also a student at Hill Valley High.

She is an obese toad-like child who believes she is a Debbie, despite the fact that they hate her.

She is quite mischeveous and impolite, and she even called her friends losers. Her stomach usually comes first; she will eat nearly anything.

She is very delusional, as she thinks of herself as a Debbie and having hundreds of boyfriends. She finds herself to be beautiful and popular. When confronted with anything that contridicts her delusions, she will hold her head and make loud noises until distracted by food.

She has red hair in pigtail braids and wears a pink dress with a white collar. Her underwear is easily seen any time she bends down, and she has stubby feet with pink flats.

"I get all my major colour food groups. Red... White... mostly white."
―Milo Interrupted
"I've never felt prettier with this garbage can on my head. Wow, the irony is even within my grasp!"
―Bucketheads
"Well, well, well! A dog always returns to its vomit... wait a minute."
―Bucketheads
"Oh, I don't know. When you think about it, isn't there no bigger sewer than the world of professional modeling?"
―Flush, Flush, Sweet Helga

Helga posing as a Debbie in "Misfit Love".

Helga in the care of Mrs, Hubbard in "Milo Interrupted". 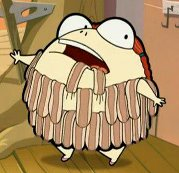 Helga after ripping off her bacon dress in "Bucketheads".

Helga running back in the cabin stark naked.

Helga's turn on stage, but she's eating her dress up.

Add a photo to this gallery
Retrieved from "https://oblongs.fandom.com/wiki/Helga_Phugly?oldid=7133"
Community content is available under CC-BY-SA unless otherwise noted.