Mayor Johnny is the mayor of Hill Valley. He is a retired pro wrestler.

Even though he is retired, he still believes he is living in a wrestler world. He has obvious anger issues. He does his job as a mayor harshly, as he only cares for the well being of the rich Hill residents, not the poor Valley residents.

He covers his face with a red and black Mexican wrestler's mask. He wears a navy blue suit with a light blue undershirt and red tie. His shoes are grey and black.

"Ladies and gentlemen, I give you Mrs. Hubbard. I don't know her first name."
―Milo Interrupted
"The fat girl's stuck in the pipe... and so is the locket!"
―Flush, Flush, Sweet Helga 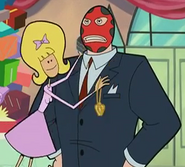 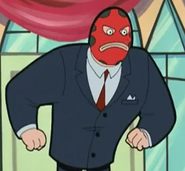 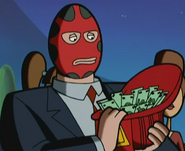 Mayor Johnny in "Father of the Bribe".
Add a photo to this gallery
Retrieved from "https://oblongs.fandom.com/wiki/Mayor_Johnny?oldid=7216"
Community content is available under CC-BY-SA unless otherwise noted.