Mikey is a 10-year old friend of Milo, and one of the Clubhouse kids. He is also a student at Hill Valley High.

He has a large dangling posterier which everybody, including his friends, makes fun of.

He is generally friendly and playful, though he shown to be quite a sad child. It is unknown if his parents have concern for him, based on what he says about them. He has claimed that his mother is stealing his childhood.

He has red hair with the sides shaved off. He wears a purple T-shirt and brown pants, and brown shoes with purple socks.

"Hey, I found my mom's car keys in my butt flaps!"
―Misfit love
"I'd go, but my mom makes me brush her hair 'till she falls asleep."
―Milo Interrupted
"Can I be the pres-di-dent?"
―Disfigured Debbie 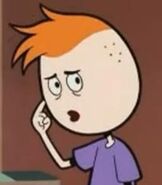 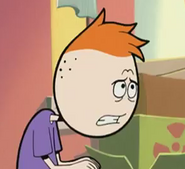 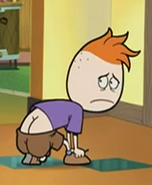 Mikey showing off his buttcrack in "Milo Interrupted".

Mikey in "Bucketheads".
Add a photo to this gallery

Retrieved from "https://oblongs.fandom.com/wiki/Mikey_Butts?oldid=7315"
Community content is available under CC-BY-SA unless otherwise noted.