Start a Wiki
Milo is the series' 10-year old main protagonist, and is a Clubhouse kid. He also used to attend Granville, until he was forced to transfer to Hill Valley High.

Often referred to by other kids as a psycho, he is afflicted with numerous mental and social disorders and is on "everything from Ritalin to Rogaine." The pollution has made one of his eyes twitch, and possibly caused his single hair.

Milo is a very miserable child who envies the Hill people, yet he is shown to be very happy most of the times in his own life. He is shown trying to make things out of his environment to make him and the people happy. He can be described as borderline psychotic and very hyper-active, with a lot of delusions but a very sweet heart.

Milo has a round oversized head with one hair. His right eye is either closed completely or twitches. He wears a light blue T-shirt with the word "NO.", and wears dark blue shorts with brown sneakers. 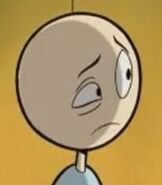 Milo dressed as a girl in "Pickles' Little Amazons".
Add a photo to this gallery
Retrieved from "https://oblongs.fandom.com/wiki/Milo_Oblong?oldid=7387"
Community content is available under CC-BY-SA unless otherwise noted.