Mrs. Hubbard is the town's bible-thumping, gun-toting old biddy who was appointed czar of child services after a disturbance in the Hills was blamed on the Valley kids.

She is very strong in her belief in Christianity, even trying to cleanse Helga when she adopted her. She does show that she likes children, though in her own peculiar ways. She is obsessed with protecting herself in whatever way, whether it be a gun or a chastity belt called the Forni-Guard 2000.

She has her gray hair up in a bun, and she wears glasses and pink lipstick. Her legs reveal very wrinkly skin. She wears a green dotted dress with matching slippers.

"Note to self: Little girl has sprouted horn."
―Milo Interrupted
"I want to give her a nice home and raise her self-esteem. Lord! Cleanse this vile hethen of her wicked, disgusting ways!"
―Milo Interrupted
"Officer, arrest that woman! She's an unfit mother, and a whore to boot!"
―Pickles' Little Amazons 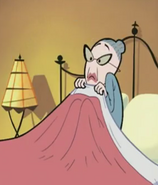 Mrs. Hubbard in "Milo Interrupted".
Add a photo to this gallery
Retrieved from "https://oblongs.fandom.com/wiki/Mrs._Hubbard?oldid=7277"
Community content is available under CC-BY-SA unless otherwise noted.