Start a Wiki
Pickles is a chain-smoking alcoholic who was originally a Hill resident, but moved to the Valley after marrying Bob.

All her hair has since fallen out due to the hazardous atmosphere of the Valley, and she is now regarded as an outcast by her former Hill friends.

Pickles is quite happy with her life in the Valley, and will often teach Milo life lessons. She can be seen as a terrific mother if her children survive the day. While she is not bitter about leaving the Hills, she often expresses disdain towards her self-centred former neighbours. She is shown to be negligent and have short term memory loss, most likely as a result of her excessive drinking.

She is quite tall, and wears a blonde wig, due to hair loss. She wears a red dress and high heels, along with purple earrings hanging on her nonexistant ears. Milo stated that he saw her wearing his underwear in episode 5, Heroine Addict.

"When I was young, you know I lived in the Hills. But then I met your father, and we fell in love and moved down here to the Valley. And you know what? All my hair fell out and I started drinking!"
―Misfit Love
"And Bob, if I don't make it I want you to be buried alive with me."
―Narcoleptic Scottie
"Oh Bob, it's not an addiction. It's just an overwhelming need that controls my life."
―Heroine Addict
"Bob, this says "castrating she-beast", and there's an arrow pointing to me."
―My Name is Robbie

Pickles at the beach in "My Name is Robbie". 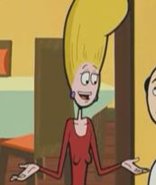 Add a photo to this gallery
Retrieved from "https://oblongs.fandom.com/wiki/Pickles_Oblong?oldid=7395"
Community content is available under CC-BY-SA unless otherwise noted.